Skip to primary content
For the three and a half months Sweet Girl has been home now, she has slept on a small cot just beside the bed in mama and papa’s room. Having spent her entire life sleeping dormitory style with at least 10 other children in a row of beds, we knew sleeping in her own room, her own bed, would be a big adjustment to overcome. We could not force her to spend those first scary nights alone in her room and we didn’t want to start the habit of her ending up in our bed, so the cot became a familiar extension of the comfortable little pallet on the floor she took to so well to those first couple of unfamiliar nights with us in an Moscow hotel room. 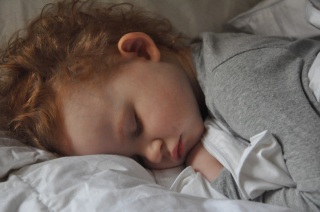 We had fully prepared to begin transitioning her to her own bed when she showed signs of attachment. She had spent some time napping in it during the day, so it wasn’t totally foreign. However, due to many outside circumstances and for a variety of reasons, we have found ourselves selling our house and gearing up to move the family onto a much better situation for everyone. Despite her doing so remarkably well with her adjustment, we have been careful to prepare her for every change and implement them slowly. We knew that moving would be a huge obstacle to her attachment and adjustment. With awareness of that, we decided not to push and not to change the familiar sleeping arrangement she was accustomed to until we were settled in the new house. Of course, this wasn’t an easy decision for us since one of us (9 times out of 10, mama) has been with Sweet Girl every night from her bedtime at 8pm to when she falls asleep, with no break, since picking her up that night in Russia from the orphanage.  Because of this, our available free time together is limited to 7pm-8pm – when the twins go to bed to when Sweet Girl needs to go to bed. It’s hard since we work all day and need time in the evening to reconnect and be still together for a moment without children.
But last night, a break through… rather, a miracle! Sweet Girl, of her own accord, asked to go “nite-nite” in her big girl bed. We were a bit startled and caught off guard, but welcomed any chance. So we quickly gathered the baby monitor and set a trail of ambient light leading from her room downstairs to the open door of our bedroom and said have at it! We talked about the house being quiet and about how she could go to mama and papa’s room if she got scared. After several testing bathroom breaks, she went to sleep in her very own bed by herself! That sleep continued until 3:30am when we were awakened unexpectedly by a toddler bedside in our room. No warning, no noise on the baby monitor, nothing, just a little person whispering “mama!”. We directed her to lay on her cot and all quickly went back to sleep and that was that. When we asked her in the morning what happened, her only answer was “scared”. That however doesn’t seem to deter her as she remains adamant about wanting to go to sleep in her room again. So as I write this, I’m upstairs just outside her room, quiet, watching her on the webcam trying to repeat last night’s brave performance!Morning update: She made it until 5:50am and then came downstairs. She didn’t want to lay in her cot and instead knee’d mama and papa in their kidneys until we were all up for the day at 6:15am.

We have 6 more weeks in our house so we’ll see how she does! She’s very proud of herself and excited so I think she’ll do just fine!