Skip to primary content
6/17 – Father’s Day:5:30am – The alarm goes off. He is up an at em before I even decipher that the noise is the alarm. That’s every morning though. I didn’t think I would sleep, but I feel surprisingly well rested. Then I notice the pounding headache. I close my eyes and pretend it’s not 5:30 am yet. This doesn’t last long. We were dressed and ready by 5:55. We went upstairs to kiss the girls goodbye. I had hoped to just rub their heads and pass on kisses. Cranky had other plans. I was choking back tears and all my fears of leaving them and in her slumber she must have sensed it because as soon as I reached the door to her room to leave, her head popped up and she started crying. Eventually we got her up so she wouldn’t wake Happy. Some bonus cuddles never hurt. And she got to give her Papa a Father’s Day kiss.The trip to Charlotte was uneventful. We arrived in plenty of time. Even though we have to switch airlines in JFK, we’re stoked that they checked our baggage all the way though. We think this means that we can just walk to the other terminal and get on our plane. Once through security which was a breeze, we grabbed some breakfast and waited at our gate.Once in JFK we realized that even though our bags were checked through, we ourselves would have to leave security, take the Air Train to Terminal 1, wait in the Aeroflot line (long), wait again to go through security (double long) and finally we reached out gate.

We had about 30 minutes before we boarded.

On the Aeroflot flight, we had personal entertainment systems. 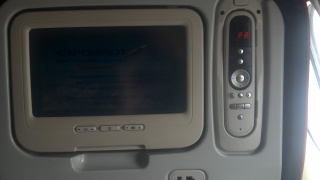 The movies were good, but the TV shows were lacking. 30 minutes after take off we got a beverage service: juices, soft drinks, water and wine. Then about 30 minutes later, we got dinner. It was the choice of beef or fish. We picked beef. It was a green bean/tuna fish salad, beef tips with veggies and mashed potatoes and a chocolate mouse for desert. Overall, it was very good. 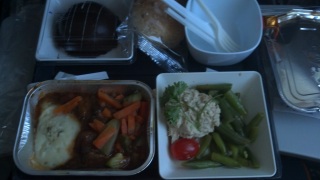 I read a book and he watched a movie and then we tried to sleep. It was only about 7pm our time, but we were flying in to the darkness. It was rough, half sleep on the plane before it was time for “breakfast”. We weren’t tired at this point since it was still only about 10pm at home.

For breakfast we were given the choice of sausage omelet or sandwich. We both picked sandwich and we were served a cold salad with carrots and a slice of deli turkey and a hot bacon, egg and cheese biscuit. We also got juices. About 30 minutes after breakfast, there was a tea and coffee service.

Flying into the capital was very pretty. I have flown into lots of cities, but this one was different. Winding rivers, lush farm land, green trees and little villages. Soon we meet Vita.. nervous and excited.

We got off the plane and went to passport control. There are 3 lines, “Diplomat”, “Russian Passport”, and other. The first 2 lines were translated into english. The 3rd line had no translation. We were the 2nd row on the plane so there weren’t too many people ahead of us. We didn’t know which line to pick. We guessed 3 by process of elimination. We were right. Only one person can enter the line at time or the person gets cranky and makes the other person leave. The person scans your passport and visa, and stamps a piece of paper and then you sign it. They keep half and you keep half.

Then you proceed to baggage claim and wait for your bags. The last rows were arriving when the baggage started coming – much faster than in US, but still a wait.  Once you have your bags, go out through the green customs declaration line (meaning you have nothing to declare). He was stopped to run his bags through the x-ray machine, but they didn’t say anything to me so I kept walking.

Vita was waiting for us right outside this door. She had a sign with our name on it. She gave us hugs and asked if we had to use the restroom. We said no, but asked if we could exchange money to get a drink. She said it was a bad exchange rate and just paid for 2 cokes. It was about $5 for two cokes.

We went outside and waited for our driver. His name is Ilya and he drives a Silver Ford Hatchback thing. We were told our drive to Sweet Girl’s region would be about 3 hours. We stayed awake about 15 minutes before both dozing off. I woke up for awhile and watched the surroundings. It seemed very rural and very poor for most of the drive. Also, we hit a lot of traffic outside the airport and it ended up taking us about an extra hour to get to town.

Once in town, we went to the money exchange. They rejected about 30% of our money even though we brought the nicest bills we could. We exchanged what we could and decided to pull out of the ATM for the rest if needed. We also found out it is illegal to enter or exit the country with their currency.

Vita took us to our hotel and checked us in, we agreed to meet in 30 minutes.

Once in the room I started feeling horrible. I thought it was because we hadn’t really slept or eaten, but soon I started feeling very nauseous and threw up. I pulled myself together enough to meet Vita downstairs. I told her I wasn’t feeling well and she asked if I wanted to go see the doctor. I said no, and we went off to the education department head to officially accept our referral of Sweet Girl. Usually, this would have been something we’d have done in the US and had notarized and apostilled there, but the department head was on vacation the week before so we couldn’t do that. While at the office I made use of their restroom several times. We were supposed to head to the notary’s, but Vita could tell I felt horrible and the driver took us straight back to the hotel At the hotel a couple hours went by and I was MISERABLE. She made me promise to call if I wanted to go see a doctor. When Vita called at about 6pm to tell us the itinerary for the next day she asked again if I wanted to see a doctor. This time no fear of spending the night in an eastern european hospital could scare me and off we went. Ilya looked terrified I was going to throw up in his car. I didn’t. We went to something that Vita said was private health clinic. It seemed to me like urgent care. There, the “doctor”, heck she might have been a nurse, asked my symptoms, took my temp and blood pressure and gave Vita 3 prescriptions for me. Vita and He went next door to buy them and I sat in the car. The whole thing took less than an hour. I came back and took all the drugs. One was a powder that was to be mixed in water. It tasted like you put a teaspoon of vanilla milkshake in a cup of gritty water. Blech. We were still exhausted and hadn’t slept in 36 hours so we crashed at 8pm.