Skip to primary content
June 19 – Day 3We woke up on Tuesday morning before 6am. That’s what we get for going to bed at 8pm. Time change is killer. I woke up feeling mostly better. By the time I was fully awake and moving, I was still very nauseous, but held it together. We went downstairs around 7:15 for breakfast. We thought it was 6:30-10am, but it didn’t start until 7:30am. We managed to communicate in broken English with the wait staff who said something like 10 more minutes. We decided to get some fresh air and walked around outside. The night before he had been to a little market down the street with Vita to get more water for me. We walked down to that to check out their breakfast options, but they were only open 10a-10p. We walked back to the hotel and by then I was feeling crummy. We got let into “breakfast”. The hotel dining room was set up, but it looked like the free breakfast was in this backroom. We were given the choice of omelet or sausage. We got one of each. First we were served bread, jam, cheese, salami and yogurt. I managed to eat a little of the yogurt, but was very nauseous by the smells of the rest. We were back up in our room by 8. Since we still had 2 hours before Vita was to pick us up, I took a nap. I think He slept too. When I got up I was doing a little better.We met Vita downstairs at 10am and drove to pick up Tatiana, the child advocate for court. We then went straight to the baby house and signed in. We went to the directors office and then moved to a larger conference room with toys and a conference table. The director went to get the doctor and Tatiana asked us several questions about our history. Why we want to adopt, why from this country, why we want to adopt an older child, what were our thoughts on adopting out of birth order. What did we do, how much do we make and are we aware of the post placement requirements.
When the director and the doctor came back, Sweet Girl’s caretaker brought her in right after. She seemed very scared and didn’t want to be there. The director sat her on her lap and Sweet Girl started to cry and asked to go back to her groupa. They gave her a piece of chocolate which she ate through her tears. We decided to let her go back to her groupa while we went through her history. After we went through her entire social and medical history and asked lots of questions, they brought her back in. She still seemed scared. I tried to show her the markers and coloring book, but she wasn’t interested. We gave her a little my little pony and she didn’t seem to care. Then I brought out the beach ball. It did the trick and we played catch for an hour in the visiting room. She also liked to kick the ball and thought it was hilarious when we missed catching it. 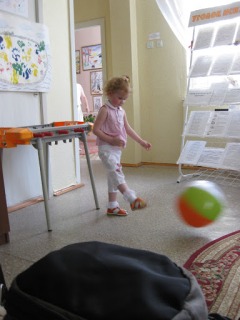 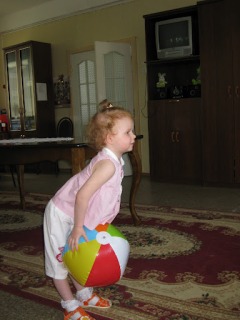 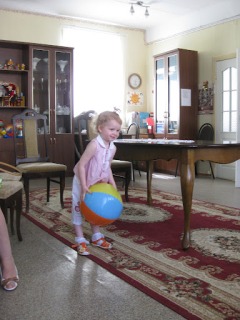 The director and other people finally left us alone so we got a couple of pictures with her. She’s still very cautious around us. 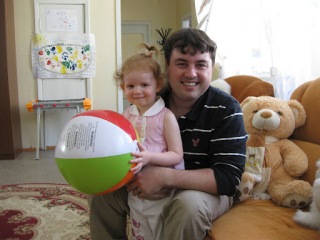 Ignore what my hand is doing here. I don’t think I knew what to do with it. 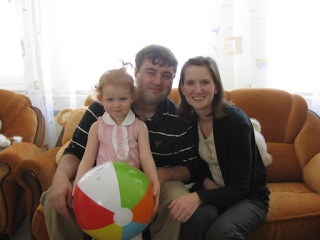 We had to leave and come back after she ate lunch and took a nap.

During our break, we started our 8 doctor physical. If you want details on this let me know and I’ll send you the write up of it, otherwise, just imagine state run health care in crappy 1950’s buildings. This took several hours and then we went back to the orphanage. They quickly brought Sweet Girl in. She was carrying her ball. She told us lunch was good and that she had a good rest. Oh and earlier we asked her favorite food and she said “soup”. She also likes potatoes and carrots. 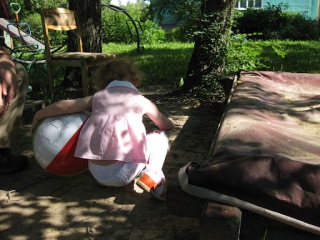 She wanted to go to this part of the yard that apparently isn’t used anymore. They don’t mow the grass at least. She had Papa help her up the slide, and then he lifted her through the grass to the stairs over and over again. 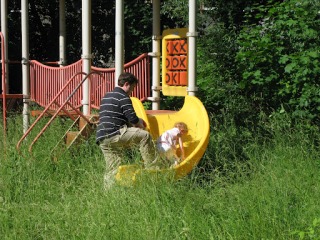 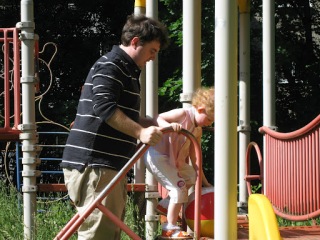 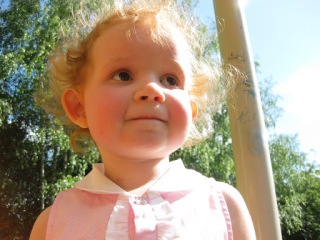 We got in trouble later because we got her clean white pants dirty. The orphanage changes their clothes and shoes before they go outside, but since she was with us, she didn’t change her clothes so her nice clothes got dirty. Oops. I might need to bring them a replacement outfit next time.

She had to use the bathroom so we came back inside and tried to color again. I brought her a color wonder coloring book, but she didn’t like the big markers, she only wanted to use the small markers in the room but they were either dead or didn’t work well on color wonder paper. So this only lasted a couple of minutes.

No pictures of it, but we have a cute video I can’t upload from here. But next we showed her the photo album we brought for her with no prompting at all, she went through it and pointed out “Mama”, “Papa”, “Babies” and “Dog”(in her language of course). She went back and forth through the pages several times. It was adorable. We then had to say goodbye.

Last night He and I ventured out into town and found a McDonalds. It wasn’t quite like home, but the real meal was very welcome at this point! 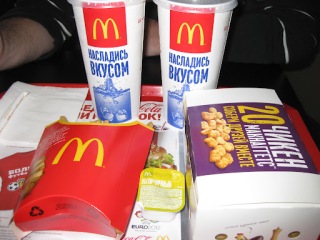 I think we finally are used to the time change because we slept 10:30p-6:30a just fine. It was still light out when we went to bed too and definitely still light this morning.

Want to talk about this? Cancel reply