One of the things we loved about our house when we bought it last April is that it has a fantastic garden. It’s about 30×30 and fenced in with a little picket fence. There is an arbor over the entrance that has vines with pretty flowers that welcome you in almost like a secret garden. In the middle of the big square is a fountain. There are paths made of stamped concrete that make an X into the four corners. It’s amazing. In theory.

When we moved in, the weeds were just starting to overtake it. Since we had so many other pressing issues with the house, we just let it go. So this year, after the poor garden suffered the last 3 years in neglect, we decided to bring it back to glory.

I determined there are 7 steps to preparing a garden.

2. Decide what to plant

4. Decide on seeds or plants

Since my attention span is usually only about 4 steps, I was already in trouble.

STEP ONE: Yippee! Thanks previous homeowners who built this garden! And because my blogging skills are awesome I have no before and after pics of the space right now. But I do have a cute picture of Happy watering the daffodils last weekend! The garden is off to the right of the picture. Then it iced here 3 days later. Not sure if those flowers are still alive. Let’s just use our imagination that I do have a designated garden space.

STEP TWO: There are some great apps that will help you plan a garden and layout your space. I fiddled with those, but ultimately, I spent about an hour one night writing down everything that didn’t require acres to grow and that my family would eat. Then I added in some more things for fun. I briefly plotted out where I thought everything could go. Then I lost that paper. I worried for a second about if I had enough space for everything or if I had enough time to complete step six, but ordered the seeds anyway.

It didn’t seem so overwhelming at the time. Eek!

STEP THREE: While, this is a very important part of the process, it’s been cold up in these parts recently and this was not a fun step so I skipped it for now.

STEP FOUR: When I determined how many plants I would need and added it up, the cost was a little high for this hobby garden so we went with seeds. I’ve never grown anything from seed. Well, wait, we planted grass seed at a couple houses. And by we, I mean, he. I don’t think it went that well. We don’t have pets because it’s all we can do to keep three kids alive, but I somehow thought that planting 19 different varieties of seeds (the blueberries, raspberries and strawberries don’t come in seed form or are hard to grow in seed form or something like that. I ended up spending an arm and a leg and getting plants for these) would be a piece of cake.

I bought some of these planting cells and also this potmaker. The seeds and supplies all got here the other week and I started planting. I started with the planting cells first thinking, just add water right?! Well, in the end, all 4 that I puchased got planted nice and pretty, but it wasn’t so easy.

The premise is that they have these little seed starting dirt pellets and you add warm water and the pellet expands and it’s a no mess, no fuss system. I employed my trust helper to add the water. 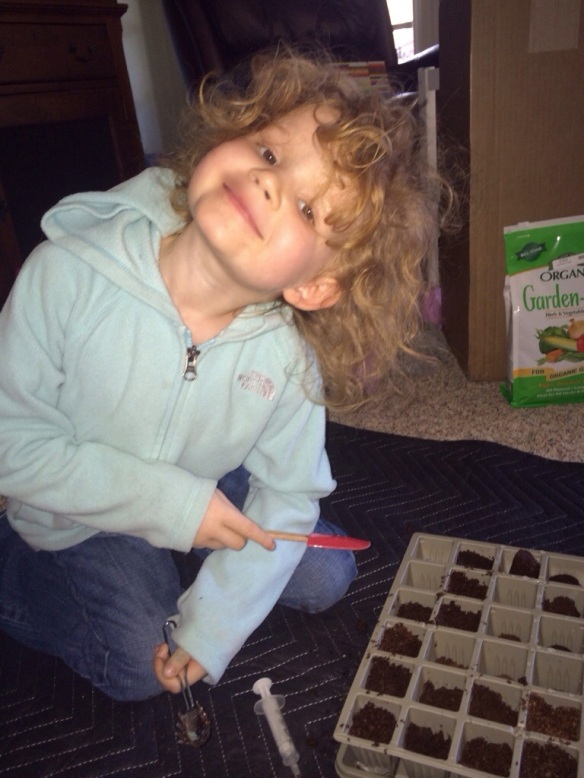 While she did a great job, some of the pellet’s didn’t expand and the ones that did had some issues too. We had to take them out of the tiny cells and manually break them up. I was too lazy to find real tools and since we were in the basement with the playroom, I just snagged some tools from the kids play kitchen. 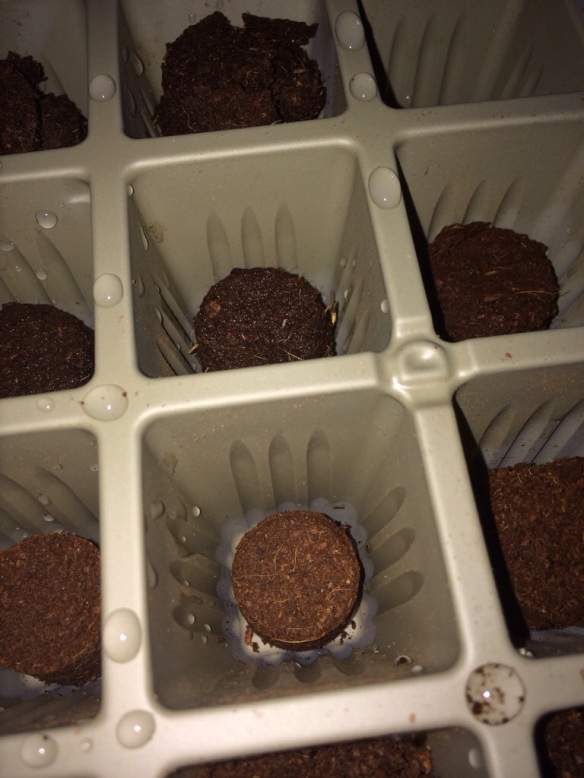 I FINALLY got all 4 trays planted over 4 nights and then realized that I still had 10 varieties of seed to plant. I couldn’t get to those because I had to now keep the seeds that I just planted alive!

Handy google told me that seeds need 2 things, warmth and water. So, I set up a little corner of my craft room with the trays and put christmas lights on top to provide the heat source. Apparently the christmas lights give off heat without being too much of a fire hazard or energy consumer. It really just confused my brain and I couldn’t figure out if it was almost Christmas or almost Spring.

I checked and misted them every day in between planting the next tray and on day 3, we got our first little sign of germination! Yay! I have a green thumb! 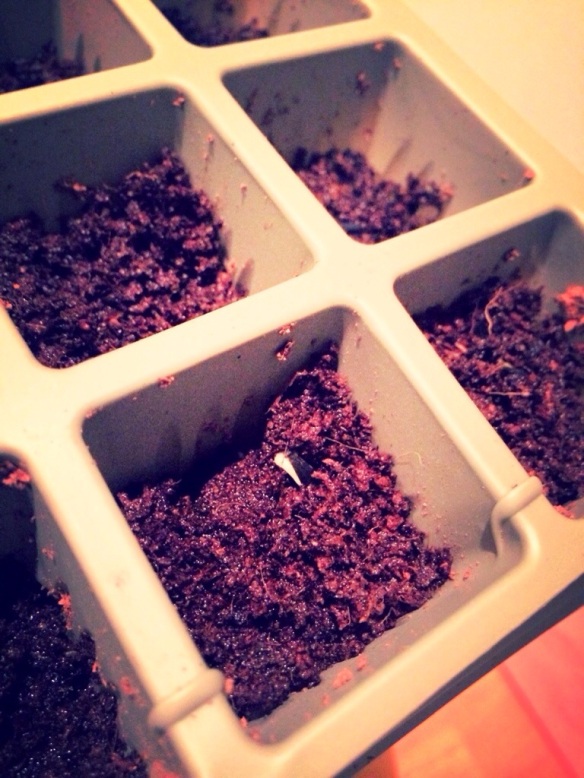 Except I still have 10 varieties to plant and I’m out of the ‘time saving’ cells. Now, my other bright idea of using recycled newspaper to make pots with the above mentioned pot maker is all I have left.

It looks so easy in the picture:

And my garden isn’t ready yet either and our weather is not cooperating to be outside to fix the garden. Did I mention that the pickets on the fence aren’t sourceable? That means that we’re going to have to hand cut 50 pickets out of lumber to match what’s already there. And then put up the rabbit fencing. And then till the soil.

Part two coming if I don’t bury myself in garden first.